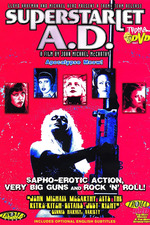 Christopher Ishwerwood once said that camp isn't making fun of something, it's making fun out of something. In the ruined world of Superstarlet A.D. the gender binary is extrapolated to a ludicrous extreme, all the men devolved to grunting, club-wielding troglodytes and all the women retro pinups who use lipstick as currency and skillfully navigate the rubble in lingerie, heels and elaborate updos. But the heterosexual dynamic that animates the binary in the real world has been completely drained out: the women all make out with each other, and see the men not as objects of desire but as threats to be eliminated. Meanwhile, among the women, hair color has become a new sort of "gender": a primary social division, a subject of prejudice, a topic of religious fervor, and even something that can be ritually changed, whether through the blood rites of the red-haired Tempests or the sun worship of the blonde Phaywrays.

"I pop pills like I pop culture," says Naomi, a member of the girl gang that gives the film its name. In this world, pop culture seems to have stopped sometime in the 80s, presumably due to the event referred to only as "the Cataclysm." Everything from the decades preceding the collapse has now been swirled together, from burlesque films and hot rods to fetish fashion and goth eyeliner. There's no sign of any digital technology anywhere — except in the soundtrack, which sometimes sounds like Kraftwerk or Gary Numan, although at other times it suggests Sparks, Nina Hagen or the analog electronics of Raymond Scott.

Like its sapphic sci-fi predecessor Liquid Sky, Superstarlet A.D. seems to have a serious message hidden under its low-budget production, stiff acting and absurd premise, though I think I'd have to watch it again to figure out exactly what it is. Something about decadence vs Romanticism, maybe. Something about how all these different factions of women construct the concept of femininity differently — through closeness to nature, through the artifice of filmmaking, through bloodlust and BDSM — and yet all end up in the same high-femme place. Something about how identity fractures when it's based on iconic figures, and how seven different people are credited with playing Naomi's girlfriend Rachel in the closing credits. Did she really have seven different faces in the movie? Don't ask me, I'm terrible at faces; the first time I saw Memento I thought Guy Pearce was Brad Pitt because he had spiky hair like Tyler Durden. And nowhere does hair take over people's identities like it does in the lost city of Femphis.