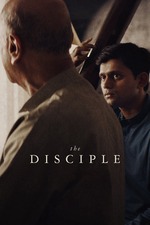 From the outset, Tamhane clearly establishes his problematic—the story of a striving artist afraid of turning into his bitter failure of a father—then proceeds to complicate that familiar template by keeping our sense of the character and his own self-awareness out of sync. (Needless to say, an appropriate approach for a film about artistic ambition facing up the contingencies of taste and convention.) Impressively, Tamhane does so not by withholding the generic (comic) markers of failure, humiliation, and disappointment (e.g. the first competition, the thwarted romance into the masturbation/porn scene), but by canny shifts in emphasis and seemingly slight structural fillips. The staging and shooting style, particularly the slow, near-imperceptible push-ins, already give each scene a certain autonomy—though Tamhane finds a variety of other ways to unsettle what would otherwise be a too-neat trajectory: after Sharad's lackluster performance, he inserts a visit to the doctor before getting the taxi-set disciple-master discussion of it; and when Sharad gets another shot during the Teacher's Day concert and gives perhaps his best performance, Tamhane withholds the expected humiliation set up by Sharad's pre-show nerves and vomiting, but then skips past the immediate aftermath, thus halting any redemptive arc. Even the flashback scenes manage to surprise and productively buck their expected function in the story: the first offers what looks like a touching father-son moment that turns out to be overbearing instruction; the second, which encompasses the train ride and outdoor concert, reverses the dynamic. In both cases, because of the limited context we have regarding Sharad's current family situation, these scenes cannot so easily be slotted into the generic trajectory.

The only time The Disciple fully synchronizes our sense of Sharad with his own self-awareness is when, in a dream sequence, the recordings of Maai—previously used to highlight the disjunction between Sharad and his world—literally voice his greatest fears. In retrospect, this scene also seems to mark a decisive break: If we previously felt we had a grasp on the character (allowing for comedy), that impression becomes untenable, and he becomes progressively more inscrutable (allowing for tragedy). But it's only during the very late flashback, to a music critic essentially shattering Sharad's youthful illusions, that this becomes fully evident; it's the film's best scene, but it derives its power from its placement (after we've already seen Sharad's less-than-impressive adult life), and would have played horribly if it were presented chronologically. Another excellent scene: after the music school confrontation, he awkwardly runs from the far distance of a busy park road, takes a call from (presumably) his mother (during which he promises to get married at 40), and then joins in for a hit of a nearby cricket game, dissipating the scene's narrative setup (and the expected humiliation) into a wonderful wide of the field, the city, and the ashen sky above. Without the proper context, the film's final leap forward and especially that closing shot could have been pat and obvious, but here it becomes impossible to tease apart despair from peace, resignation from quiet fulfillment.

Need a second viewing, as the film didn't fully click for me until after the credits had rolled, so the ending took me by surprise. But after turning the film over for a bit, I'm tempted to say that this starts out as a seemingly easy comedy on creative pursuit, but ends closer to John Williams' Stoner somehow approximated by cinema's naturally externalized viewpoint.