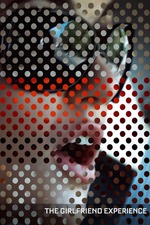 Had intended to write something, but you might as well just read Ignatiy Vishnevetsky's MUBI review, which is more insightful, succinct and beautifully written than I could ever manage. (You could probably point to some of Vishnevetsky's other writing as better than this, but I'm deliberately choosing a more low-key piece to wax rhapsodic, since imo, that provides a better sense of his talents.) But, just to jot down some of my own notes in brief: invigorating Godardian fragmentation; exciting game of formal keep-away, which obscures the full narrative arc for as long as possible; gorgeous use of red; excellent use of performers. There are some duller elements in the narrative, particularly how the weekend getaway resolves, but overall, still a thrilling stealth-essay (on late capitalism, no less), and a successful incarnation of the techniques Soderbergh first attempted in Full Frontal. Also, really great poster; would probably send the wrong message, but I wouldn't mind having it on my wall.