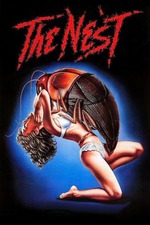 A fun and underseen 'killer bug' film, The Nest is essentially a highly competent, if occasionally trashy, amalgamation of the eco-horror films of the past: we have the 'humankind meddling with science' theme of Tarantula, the 'let's ignore this threat and concentrate profitable tourism' theme of Jaws, and, as always, the reminder that humans are not in control of the planet as much as they think they are. This may appear unoriginal, but for me, the film does more than enough to put fresh spins on these ideas and also takes them seriously enough.

It's obvious that in terms of certain script aspirations the film's reach is exceeding its grasp; the budget clearly didn't make some ideas easy to execute, but you have to commend the film for trying them anyway mostly succeeding. And while there is an awkwardly useless love triangle going on between the Sheriff protagonist, his old flame (the unscrupulous Mayor's daughter) and a cafe owner, the film never becomes too distracted and, above everything else, fully understands what it is: a killer cockroach movie. Terri Treas also provides a memorably twisted human antagonist as the mad mutant-cockroach-breeding scientist - to a certain extent, she steals the film.

I fucking love the poster too. (Just to be clear, cockroach-rape doesn't happen in the film). More people should see this!