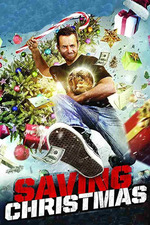 In the vein of Kirk's documentaries about American exceptionalism and the evils of secularlism, Saving Christmas purports to take the holiday back from those no-good Christians who hate its appropriation of pagan imagery and explains how it's not actually pagan imagery but Original Christian Symbolism Do Not Steal. However, unlike Unstoppable and Monumental, this takes the form of an Original Story: Kirk is at his sister-in-law's house, holding an elaborate Christmas party, and he hears that his brother-in-law Christian (Clever Name) is a stick in the mud. So when he finds out that Christian thinks that Christmas is a bad, Kirk tries to convince him (and his audience) that Christmas is a good by not offering any legitimate arguments but taking appropriated symbols like the Christmas tree, Santaman, and Christmas Jesus and giving really weird explanations for why they're Good for Christians (TM).

Here are the arguments.

Christmas Jesus relates to His crucifixion in that He's wrapped in swaddling cloth, the same cloth Jesus was wrapped in after dying from suffocation and stress and being nailed to a cross. What a twist.

Santaman relates to Saint Nick and how he defended Jesus' divinity with intense violence and mood swings. Eh, heard it before.

It's all just "pulling this outta my ass" arguments but targeted for a Christian audience. But what makes this film such a masterpiece is that it's so incompetently sequenced together that it looks like a Surrealist film. I mean, like pure 1930s Surrealism - straight outta Luis Buñuel's nightmares levels of Surrealism. And yet you know it's supposed to not be like that - every pause is so awkward. Every audio flaw is so bad. Every line of dialogue is delivered at a snail's pace that the film is just so hilarious for the wrong reasons. It's the most fun I've had at a theater, I swear. That and Interstellar.

And yet I wonder if this film's just as good-bad while watching it solo.