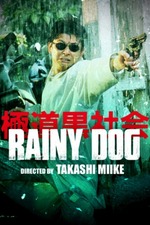 "I feel like going to a place that doesn't rain."

There are a ton of legitimate arguments to be made that this is Takashi Miike's best film. I don't know if I would go that far, but I always enjoyed showing this to people who defined Miike by Ichi the Killer back in the dark pre everything-at-our-fingertips days. This is a deliberately paced movie that lacks the anarchic dark humor and excess splatter that tend to be identified with him.

Rainy Dog is an exploration of family in the way only he does. You definitely notice how often Miike films explor the concepts of family, or what constitutes as a family, or how those bonds can be developed and rent apart. From his blood-soaked gore fests to his quiet quirky stuff, this is one of the most constant He never settles on the whole "blood is thicker than water" or "can't choose your family" messages though, which is why movies like Rainy Dog become so interesting. You can easily imagine what different directors would have done with a story about a hitman, a prostitute, a possibly illegitimate child, and the connection they build for themselves against a backdrop of criminal seediness, but you can pretty much guarantee none of them would have handled it like this.

What really puts this over the top is that there are some truly inspired performances here. Sho Aikawa is as grand and subtle as ever, but Tomorowo Taguchi pretty much steals the whole movie despite only having five or so scenes.

Miike's first theatrical release - and coincidentally the first part of this loose trilogy - is where he began to show his hand thematically as a director, but Rainy Dog is where he proves what his vision really is.

WATCH if "Miike does melancholy" is something that pricks your ears up. DON'T WATCH if you want to see intestines and split dicks instead of Miike channeling Kitano.