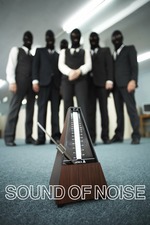 "This is a gig! Everybody keep calm!"

I, like many of you, have often wondered what it would be like if STOMP became a radical anarchist group that decides to aurally terrorize the artifices of capitalist society. Now friends, we have to wonder no longer.

There is a little bit more to it than just banging on a trash can and drumming on a street light, like a tone deaf detective with a hatred towards music and a musical lineage as well as some legitimately funny scenes between the madness. It is shot well, but obviously its sound direction is the main strength with genuinely cool musical segments and great editing during the detective's low fantasy moments.

The movie itself is purposely unclassifable and exists as an entertainingly bizarre piece of wanky artistic exploration. And seriously, who doesn't love wanky artistic exploration? The conceptslashgimmick is so easily enjoyed it would have been just as easy for the whole movie to cop out on the rest of the movie, but it doesn't do that at all and actually fleshes out an amusing - if scant - narrative around the percussion of the deed.

WATCH if you want some great ideas about how to quit your band. DON'T WATCH if you can't drum up any interest to enjoy a movie that marches to a different beat.