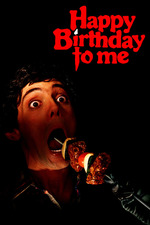 Happy Birthday to Me

A random grab from my unwatched Blu-rays. It's part of Mill Creek Entertainment's Retro VHS Look Series with packaging designed to look like a VHS release - pretty cool.

So this is another early 80's "slasher" that I missed back in the day. Unfortunately, other than aiding my completist mentality, it had little impact on me. I didn't realize that the film was directed by J. Lee Thompson (Cape Fear, The Guns of Navarone) until I threw it in the player. Definitely has a different feel then other slashers of this time. I see it as more of a sophisticated psychological thriller with a body count.

The Mill Creek release is bare bones except for its cool packaging. If you are a fan of the film, you should go with the Indicator Blu-ray release: