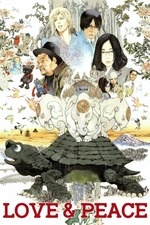 Sion Sono is a genius. Not just a master filmmaker but an incredible artist and writer as well. This just might be his masterpiece. It's almost impossible to categorize but I see it as an epic fairy tale/fantasy/satire/love story. It's hilarious, moving and totally engaging. Amazing practical effects by Kiyotaka Taguchi. Tons of puppeteering. Great music. Transformative performances by Hiroki Hasegawa, Kumiko Asō and Kiyohiko Shibukawa. (Kiyohiko Shibukawa delivers one of the best drunk performances I've ever seen.)

No US release on this title which is absolutely ridiculous. Third Window Films released the film on Blu-ray in the U.K.

I love this film.

The Wind and the Lion