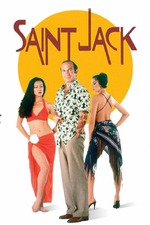 I finally watched this after wanting to see it for decades. A little underwhelming.

Robby Müller lensed the film and it looks good but not on the expected Müller level.

from IMDB trivia: According to Peter Bogdanovich in "This is Orson Welles", Bogdanovich wanted Welles to direct this film, and Welles was set to do so. However, after some pressure from the studio and his steady girlfriend Cybill Shepard, Bogdanovich ended up directing it. This led to a falling-out between Bogdanovich and Welles that wasn't resolved until shortly before Welles's death.