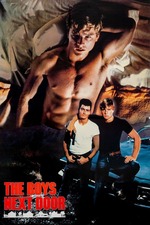 The Boys Next Door

Revisited this film because Severin released a fantastic new Blu-ray. I actually enjoyed the film more now than when I watched it on VHS back in the 80's. Some of that enjoyment is seeing Los Angeles (and Hollywood in particular) circa 1984. But I also see that director Penelope Spheeris and writers Glen Morgan and James Wong (who have both gone on to very successful careers in television) were attempting more than just a violent exploitation film. They were attempting to tackle xenophobia and the pathology of violence - yet it was produced by exploitation film producer Sandy Howard so there are things about it that clearly fall in to the genre/exploitation realm.

The scene in which Maxwell Caulfield murders Patti D'Arbanville remains incredibly disturbing... especially as she is asking "why" mid strangling. Ugly stuff. (The film had to be cut and submitted to the MPAA 10 times to get R rating.)

The extras are fantastic. I'm sure Sheen was asked to participate and declined... would have loved to hear what he had to say about this film. Caulfield calls him the "devil's spawn" and Spheeris pretty much agrees in the 2015 interview they have together.