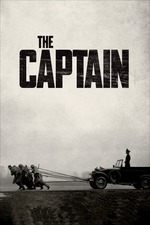 Read a tweet about this Blu-ray being available on Netflix and read up on it. Premiered at TIFF and had a healthy fest run. Music Box picked it up for the US. The film follows Willi Herold (Max Hubacher), a German army deserter who stumbles across an abandoned Nazi captain's uniform during the last, desperate weeks of the Third Reich. Willi soon becomes what he was fleeing from.

Florian Ballhaus, son of cinematographer Michael Ballhaus and Helga Ballhaus, delivers truly gorgeous b&w imagery. Unlike Schindler's List, this film is anamorphic so it's a slightly different take on the look we so associate with the era.

I haven't seen any of director Robert Schwentke's mainstream Hollywood films but I will eventually. He has style and makes bold moves so I'm interested in seeing how that plays out in a film like RED or R.I.P.D.

I love the end credits - having the actors in character (in Nazi uniforms) parading down the street in present day Germany and interrogating unsuspecting civilians. Speaking of bold... that must have been risky to shoot.

My one issue with the film is that Willi's turn to the dark side is almost immediate and doesn't build (which I think would have made the idea of power seduction more impactful) ... but then I realized that it's based on a true story. So I guess this is the way it played out.

Watched on Blu-ray rented from Netflix