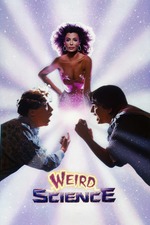 Love this film and rewatching it made me realize how great Kelly LeBrock is in this film. Can't imagine this film with Sharon Stone, Kelly Emberg, Demi Moore or Robin Wright (the others considered for the role). Wish her career had a different trajectory. She's so solid. And Bill Paxton is the 2nd MVP in this film. Might be my favorite performance of his.

Oh... I love Anthony Michael Hall but I can't stand his jive pimp impression. The bar scene is hilarious but the drive home is excruciating.

Arrow Video Blu-ray release is great but I wish they were able to interview LeBrock and Anthony Michael Hall.