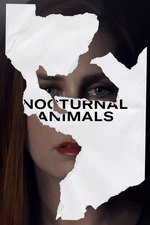 Tom Ford's Nocturnal Animals is an interesting and unique take on the revenge story.

A "story within a story," in which the first part follows a woman named Susan (Amy Adams) who receives a book manuscript from her ex-husband (Jake Gyllenhaal), a man she left 20 years earlier, asking for her opinion. The second element follows the actual manuscript, called "Nocturnal Animals," which revolves around a man whose family vacation turns violent and deadly. It also continues to follow the story of Susan, who finds herself recalling her first marriage and confronting some dark truths about herself.

The idea of putting three gripping narrative stories (the present, the flashbacks, and the manuscript) in one film was excellent; the way they run parallel with each other using similar themes and events was masterful. The three narratives were expertly interlaced together with great pacing and it played with the difference between reality and the book cleverly, and thus makes it captivating.

Edward's violent revenge novel, Nocturnal Animals, is an allegory on his tragic relationship with Susan, written as a way of dealing with his unresolved anguish over their divorce. He wants her ex-wife to know what he's really been feeling throughout the course of their relationship by creating a novel that figuratively depicts this. It's an emotional revenge story told through a fictional physical revenge story.

This film is packed with strong performances from the cast. Amy Adams, Jake Gyllenhaal, Aaron Taylor-Johnson, Michael Shannon, Isla Fisher - all of them gave their best efforts and neither one of them disappoints. Amy Adams's performance relies much more on the emotions of her character and she really nailed it every time. The performance of Jake Gyllenhaal was the best I've seen. I can’t help but to sympathize with his character throughout the film. Isla Fisher also showed us her amazing acting chops. Michael Shannon and Aaron Taylor-Johnson were great in their supporting roles. In terms of an Oscar nomination, I kinda wished that Johnson should be the one getting nominated instead of Shannon. Don't get me wrong, I liked Shannon's performance but Johnson was the real stand out compared to both of them.

Technically speaking, it was flawless. The cinematography was uniquely stunning. I loved the way how they differentiate the three separate stories in terms of its color palettes and atmosphere. I also loved the choices made on when and how to cut away to another plotline, and most shots were brilliant because of the close ups of the characters' faces, which is done to reveal raw emotions.

Oh, and that ending? Wow.