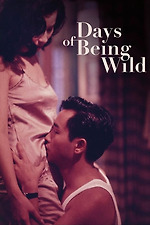 Having seen and loved 2046 and In the Mood for Love, I was excited about finally seeing the first of the trilogy. I expected it to be good, but not as good as the other two. Well, it turns out I was right, but just barely.

Wong Kar-Wai is the master of loneliness and longing. No one does it better. It is not the easiest thing to film, this inner life, but he does it brilliantly. One of his ways is to show rain. He doesn't use rain in that typical way where the character is looking out the window at the bleakness of it all. He doesn't do it to set a tone or a mood. He does it to display the characters' inner life. His characters are out in the rain, not watching it from inside. Usually they are without umbrellas. They are so immersed in their thoughts, in their loneliness, in their longing that they get drenched without realizing it or they don't care.

Days of Being Wild is also about loneliness and longing. We are introduced to 5 characters who long for something they can't have. It doesn't start that way. The genius of Wong Kar-Wai is that he shows the story of loneliness and longing in its particulars. We begin with characters who are not yet affected by it. They may be lonely, but they don't long for anything yet. We watch as they are seduced by the possibility of love. We watch as they take baby steps towards it. We watch until we see them take the plunge. Then their world is shattered when they discover they can't have what they long for.

It is one of life's cruelest moments when a void is created that was not there before. That is the trilogy. That is what Wong Kar-Wai knows so well.

If I had to rate the films within the trilogy In the Mood for Love is still the best, being absolutely perfect. I would then have a hard time picking between Days of Being Wild and 2046.

Part of the Sunday Mornings with Coffee Series