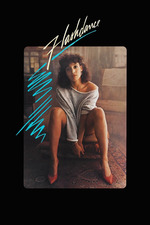 I remember Flashdance from its original release. I remember quite well because Jennifer Beals was a welder. A welder! That is so cool. I really can be anything, contrary to what I had been told by high school guidance counselors. Oh they talked the talk: of course I could be anything I want, but all of those career "know yourself" tests insisted that I should be a secretary instead of the lawyer or architect I wanted to be. But no one said anything about being a welder! Or an electrician, or work in road construction and NOT be the one just standing there with the STOP/YIELD sign like my friend Sharon.

The movie started and I loved it. The intro is great. Gritty cinematography, the industrial feel of the city, train tracks, warehouses, and our Alex Owens (even her name isn't traditionally female) cycles to work in work boots and heavy work clothes. YES!

Then it shifts to her other job. Exotic dancer. Ok, well, I knew there had to be a catch.

Our Alex claims she needs both jobs to make enough money to get into a ballet school... but surely being a welder pays good money? The guys she works with don't have 2nd jobs. Is she being paid less?

She's a good dancer, even if the entire thing is sexualized for the men gazing at her. I guess even welders have to be sexualized... but maybe that's not fair. Maybe she really does want the extra cash and she does love to dance and if it helps her meet her goal and all that...

But then we switch to seeing her train in her own apartment. She is half naked, but hey, maybe dancers do dress up like that when practicing. Maybe they don't just don the nearest sweat pants and t-shirt. I can buy it I guess. Until the camera interferes. She's moving frantically, head bopping this way and that way. Camera has a close-up of her head which keeps moving frenetically. Then the camera goes to her ass and thighs. Stays there for a while. She's still moving frenetically. More head shots, back to ass... head, ass, head, ass... feet every once in a while. Ok, so I get it. She's moving awful fast. She's good.

But see, the thing is that during the ass-thigh shots, we also see her hands. Her hands are running up and down her thighs. Well that seems out of place, I thought that with the first shot. Then I noticed that it was happening with every single one of the ass-thigh shots. Her hands kept feeling her thighs, up and down and her hands were slower than the motion of her legs running at a mile a minute. She was doing what the director thought was sexy - dancing frenetically but throughout slowly moving her hands up and down her bare thighs. Cause that's what people do when they are jumping around very quickly.

And then I understood. She was going to be sexualized throughout the rest of the film. Oh sure she told the boss she would not go out with him (twice) but did anyway and slept with him almost immediately. And sure she's the one who instigated the sex. And yeah, she is stand offish until she thinks she's being wronged and sees him with his ex-wife in which case she goes into full ballistic revenge mode breaking his window with a rock. But a case could be made that she is a 'strong female character'. She chooses what she does. She initiates the relationship. She 'tells him off' (as they used to say back in the day) when she feels she's been wronged.

Except that she isn't any of those things, really. She isn't a real character. She's a generalization of a 'feisty female': a guy's version of a 'strong woman' who is independent and strong willed and argumentative and is allowed all those characteristics until they stop being cute at which point a good dressing down will take care of everything. And let's not forget - she may have a non-traditional job and be as independent as she wants, but if she ain't a sex pot, then she is doomed. The boss had to see her dance in the nightclub before he paid attention to her (he is told by his friend that she works for him, and he smiles, suddenly very interested, even though she's worked for him for a while and he didn't notice).

I had forgotten that part of the film. But I'm quite sure I got the message clear as day when I saw it on original release: you can take a man's job and you can stand up and argue and be independent and that might actually be attractive BUT remember that men will only go for that IF you are sexy as hell, preferably a stripper or exotic dancer (publicly or privately). Because at end of the day, no matter how independent you want to be, and no matter how much you might want to deny it, everything is still about catching a man, and to do that you have to prove that you are sexy as hell.

And that is how I know that this was written and directed by a man, without even looking at the credits. Yes, this film is from 1983. So you understand how depressing it is to watch it in 2017 and see that not much has changed.