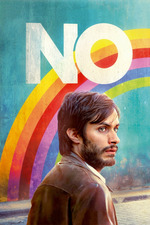 Finally you can let other Chileans know exactly what those atrocities were. You can let the world know. Finally the world will know about the disappeared, the tortured, the political prisoners. Everyone will know what really happened in Chile under his watch.

And instead, someone wants to use those 15 minutes to show a happy Chilean people on picnics, dancing in the streets, laughing and singing, hoping for a better tomorrow. A better tomorrow. Seriously? I mean, seriously?

Therein lies the conflict at the heart of NO, a fantastic film about Chile's democratic vote to give Pinochet another 8 year mandate, or not. There is no real campaign for the "no" side for a few reasons. There is no "no" side, really, there are only political groups that have suffered and want the world to know. And besides, everyone knows the entire thing is a facade. Chile must look democratic in order to gain favour with the international community. An official "no" campaign would just legitimize that facade.

So when someone suggests creating a real "no" campaign, leaders of various groups are skeptical. Their concerns reach new heights when the campaign they reluctantly agree to is taken over by René Saavedra (Gael García Bernal), a famous ad executive better known for selling soft drinks than being invested in politics.

The use of lo-def tape and handheld, methods which might induce exasperation given its abuse in the last decade, are used perfectly in this film. They allow the director to seamlessly integrate archival footage with filmed footage, creating a much more integrated historical picture of the day. While the film is fictional, having that documentary look only enhances the story's suspense and its real-life historical background.

I was quite taken with this film, more so than I expected. The history is presented in such a way as to not require prior knowledge of Chile's political situation in the 80s while avoiding the traps of too much exposition and pontification. Director Pablo Larrain allows the characters and their particular circumstances to be the focus, letting the political background shine through their actions more than their speech. While that may have more to do with the fact that the Larrain's screenplay is based on a play (by Antonio Skármeta), Larrain must nonetheless take credit for having created a vivid, suspenseful and always captivating film. If ever there was a question as to whether or not the play was filmable, that question has been firmly put to rest.