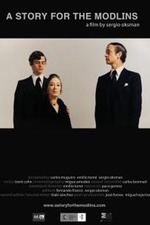 Creep in a T-Shirt’s review published on Letterboxd:

A Story for the Modlins is unlike anything I have seen before. It is a short documentary, that recounts the lives of the reclusive Modlins, through many old photographs, and a VHS tape. On the outside that might seem fairly boring, but what we get is a quietly painted portrait of human life and artistry. The Modlins are not rich nor celebrities, with their only claim to fame being Mr. Modlin. Mr. Modlin appears for a brief second in the background of the final scene in Rosemary's Baby. After that appearance, he and his family move to Spain, and stay and work almost entirely in their house. It is here that the film explores familial relationships, Christianity, art, and isolation. However, it is all through the Modlins. The film very literally presents everything, without commenting on it, letting the subject, the Modlins do that instead. What does raising a child, a teenager in near isolation, forcing him constantly to be the subject of art do to a person? I ran through the gamut of wonder and amazement, to despair and sadness, and then something close to anger during the haunting last scene. I don't want to say why because of spoilers, but the film is truly great. In a half an hour or so, I feel that I lived as a Modlin, or rather understand them in a way no one else did when they were around.

Creep in a is using Letterboxd to share film reviews and lists with friends. Join here.