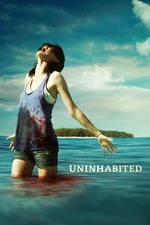 “Nothing ever dies. Things just reform”.

Don’t you just love it when the credits open with inspired by actual events in an attempt to hook you in? A young couple decides to spend their holidays off the north coast of Australia, dropped off by a charter boat on one of the many tiny islands in the Great Barrier Reef. Thinking that they have the island all to themselves, they discover that it might not be the case and an empty, shuddersome looking shack next to a grave in the middle of the island might hold the answers to what they’re experiencing. Forget about the deadly wildlife you might encounter, as someone or something is obviously trying to unsettle them.

While competently made it follows a standard pattern. Think along the lines of a haunted house formula, but the house is actually a tropical island. Its minimal style engineers the natural beauty of the surroundings to lure you into a false sense of security, as the two characters fool around, relax and explore the open spaces. A breathtaking, tranquil backdrop is strikingly photographed with visual contrast and abstract shots of a crystal blue coral reef, golden sands, richly green vegetation and the ever reaching skyline. But their intrusion stirs up a horrific past that won’t rest, where the beauty masks something cancerous and vengeful. Their belongings are messed about, shadowy figure appears, footprints show up in the sand and voices are heard on the wind.

Suspense slowly materializes from its slight premise, questions begin to add up and foolish character decisions become the norm as a progressive plot tool. The couple eventually clash over what they believe they’re facing and emotional remoteness sets in. There are moments when it makes your hairs stand up on the back of your neck, using subdued thrills with a hauntingly indigenous sounding score, but at the same time it’s so familiar in execution it doesn’t surprise. I really didn’t know what to make of the ending and final shot though, felt overly redundant and before that occurs there’s a tragically ironic twist of fate that worked much better. Palatable performances from the two leads Geraldine Hakewill and Bob Baines made their buoyant chemistry believable that I actually felt for them.

“UNINHABITED” had its flaws, not whole a lot happens and it's beyond routine, but I’m a sucker for anything on a tropical island.