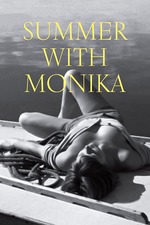 This is definitely one of the more accessible Bergman movies I've seen so far.

Summer with Monika relives heavily on the strength of the performances of its two leads. So it helps that Harriet Andersson and Lars Ekborg are both incredible in their respected roles and have such a natural chemistry.

I liked that Summer with Monika didn't necessarily adhere to the romance movie tropes of the 50s and 60s, especially in the Hollywood movies of that time.

Bergman's writing breaks these conventions on a grand scale. The female lead is not subservient or the 'damsel in distress', but instead she is funny, outspoken and in control of the relationship, more so than her male co-lead. He isn't too charismatic or suave, and certainly isn't the 'can do no wrong' leading man either.

With each film I watch of the Swede's I'm more and more impressed with the sheer impact he can have on the viewer; whether this is through visuals, themes, messages, atmosphere or the performances he gets out of his actors, he could easily become a favourite director of mine in the not too distant future.