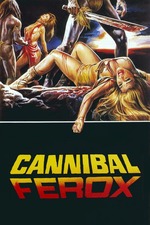 
•I feel like I already like this movie better then Cannibal Holocaust, I could be wrong though.
• I don’t like seeing animals getting killed by anacondas though. Hopefully that’s not how the rest of the movie is gonna go.
• Goddamn, I fucking hate all the animal killing in this. Only reason I’m still watching is to see the village get revenge on this douche bag.
• HAHAHAHA, they cut off his Johnson and ate it lol. Jesus. Must have been hungry haha.

•”The earth is round, you can’t just fall off” I can dig that line.

All in all honestly it was a bad movie, I’d recommend it but with a strong warning against anyone who cares for animals or extreme violence. The story of it all actually kept my interest and I just wanted to see how that dick head Mike was ultimately gonna get killed off, which could have really been amped up for all the bs he pulled in this. Not a bad movie, BUT I hated all the animal killings in this. It wasn’t nature just being nature and survival of the fittest it was the fact that they felt it would make the movie more extreme by actually killing animals. I’m no PETA member but I definitly wasn’t about those parts of the movie.