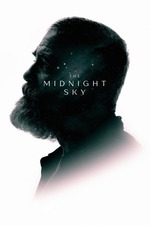 The Midnight Sky is a completely average experience. I'll give it some credit in the sense that it's not what I expected. I expected it to be a pretty generic sci-fi thriller thing, but it's way more muted and emotional. Like there's a couple high intensity bits, but it's mainly just people being sad and lonely. I actually like that approach, caring less about doing over the top action set pieces and focusing in on the emotions.

Unfortunately, it doesn't fully work. It's really over dramatic sometimes and other times it's really muted and low key, so it's a total mismatch of intensity, and it doesn't work out. Also, the plot is all over the place, it switches focus constantly, there's parts that don't feel fully resolved or explored. It's kinda messy and Clooney's direction isn't enough to really carry the movie.

The technical aspects of the movie work well. The cinematography has some real highlights, the VFX look pretty decent, the production design is solid.
Alexandre Desplat continues to carry mediocre movies with his god tier scores. I think his score here makes up for some of the weaker parts and does most of the heavy lifting in terms of making me feel something.

It's a very bang average movie. It's probably going to get nominated/win a couple awards purely because big budget VFX movies are fucking DEAD this year, but other than that I doubt this movie is going to leave a huge impression