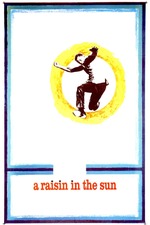 A Raisin in the Sun

Having fallen in love with A Patch of Blue a few months ago and Guess Who's Coming to Dinner just the night before, I was extremely excited to watch another critically acclaimed Poitier film, this time with A Raisin in the Sun. As you can see from my rating, I did not enjoy it as much as others.

My main problems with the film come from its conception. Having been originally a play Poitier starred in, the film stays a little too true to the format. One of the great things about a play is that performances will differ nightly and you never know what could happen. But with a movie version, you have to make sure everything is even better than usual to get past the audience not being able to be there. I would say the performances almost reach there. Typical to the other Poitier films I have seen, A Raisin in the Sun is filled to the brim with incredible monologues. Unlike the others that I enjoyed immensely, this film also has some pretty middling dialogue in between these big moments. Boring and unevenly written, it made me realize I was just waiting for another monologue to appear.

Besides the performances there really isn't much to offer in the film. The camera work is alright, the soundtrack is scarce, and the vast majority of the film has characters just sitting down and speaking so there isn't even anything to say about the blocking of the film or things similar. Not a terrible film, but it would have been better to have seen a play of it back in the day.