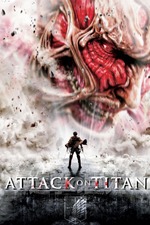 When Attack on Titan first aired I believed I watched all of the first season, but then proceeded to try to forget it as much as possible because of the exceedingly poor taste it left in my mouth. Now I can say I have seen the live action movie also. And unfortunately I don't think I will be able to get it out of my head.

The plot is an absolute mess. Things don't make any sense, from major plot points to entire world building aspects, something is amiss in each section. But at least there is some action right? Even the action is painfully bad, with terrible effects and really really bad cinematography. Frequent cutting and very flat shots lead to each fight just looking dull, no matter how engaging it actually is.

Also all of the characters are awful. Except maybe the guy that throws a titan. But that didn't make any sense whatsoever either. The film makes no sense and is terrible. Goodbye.

Do or Do Not. There Is No Try.