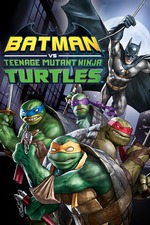 What a great movie! Perfectly capturing and then combining the essence of these characters and their stories, and then continuing to tell a compelling story. Batman vs. TMNT has great fights, great voice acting (Kyle Mooney as Michaelangelo is fantastic), and some really great lines. Not only that, but the film succeeds in making all of the Batman characters feel fresh and new and the redesigns are all fairly clever.

But really, there is only one reason you will need to watch this movie. Slight spoilers up ahead: Batman says Cowabunga! It's hilarious and is also in one of the best fight scenes. The film had me afraid that Batman was just going to be too strong in the film and easily defeat the turtles but I think the power gap is very reasonable and makes a ton of sense when watching the film.

I would love a sequel to this film. It is one of the better Superhero movies I have watched this year, and had me consistently laughing. The turtles are great, Batman is great, and the villains are great. Thats all you really need.

Johnny Kapahala - Back on Board