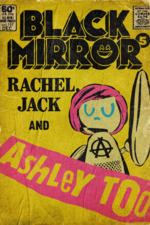 Miley Cyrus playing a pop star living a double life is pretty on the nose Black Mirror. And I think this episode perfectly sums up the problems with season 5. Everything devolves into being generic and way too on the nose, while also cutting down the quality of every episode. I couldn't tell if I was watching Black Mirror or Into The Dark, it was so mind numbingly similar.

The idea of the episode is fine, but all the concepts of Season 5 are recycled. We have had a VR game episode. We have had an episode about perfect copies that are AI. But all of those were done better. This episode just was incredibly dull and unfunny, and the only thing it seemingly had going for it was Miley Cyrus as a robot swearing a lot.

I mean I guess the Head like a Hole cover at the end was okay??? Season 5 of Black Mirror was incredibly disappointing and definitely the worst yet. Let's hope better for Season 6.