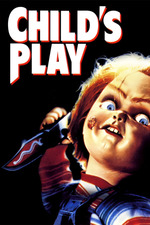 Somewhat interested in seeing the reboot of the franchise with Mark Hamill, I decided to watch the original Child's Play. A note: Tom Holland as a director made Fright Night, which is top tier horror in my opinion. So I was hoping to enjoy Child's Play. However I did not.

From the very beginning of the film I was a little worried. The opening scene and setup is too stupid to believe, and removes any question on what is going on. The film straight up just says to the audience, here is this bad story we came up with with no room for nuance or surprises. But if the script is good or the action is fun then the film can make up for a bad base story.

Child's Play has neither of these things. The vast majority of the script relies in the later half relies on the audience reacting to Chucky saying bad words or acting like a serial killer as a doll. The first half relies solely on the performance of a child actor. So the end result is just a complete mess. The acting isn't good, from almost any performance. I guess I enjoy the voice for Chucky, but his lines are so abysmally written that it doesn't provide any semblance of decency, even with a good voice performance.

The only part of the film I can say I genuinely enjoy is I think the performance by Chris Sarandon; which far excels anything else the film has to offer. He can also be seen as the antagonist in Fright Night, which is a beautiful performance as well. But every time he was on screen I couldn't help but wish I was watching that film instead, so yeah, definitely did not enjoy this one.