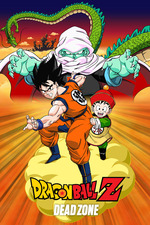 It's interesting to think about how much Dragon Ball content I have consumed while still knowing very little about it. I mean like, I know the broad story strokes and can name a decent amount of characters, but arc to arc I get pretty lost. I have seen probably 30 or 40 episodes, but the vast majority of the knowledge of the series I have comes from the video games, and a lot of them don't do a great job in telling a well put together story. However, I am watching a few of the Dragon Ball Z films for my next podcast, but in the mean time I decided to watch a few more by myself. And what better way to start than with the first Dragon Ball Z film, Dead Zone.

A note about most of the Dragon Ball Z films from the 80's and 90's: most end up running less than an hour, or just slightly above. Because of this, at least with Dead Zone, it feels less like a film and more like a 2 episode arc pushed into one product. This isn't necessarily a bad thing, but at least with a "first film", going with something like Dead Zone just feels extremely underwhelming. Garlic Jr. isn't a very menacing or compelling villain, and he doesn't really have an opportunity to change that in the short time he is around.

The voice cast did a pretty good job. I personally chose to watch the dub, because the few episodes I did watch as a kid were dubbed and it felt more comfy for me. It's always a toss up with 80's English Dubs on the quality, but I found most of the voices to be highly engaging and well executed. In other parts of the sound, the quality degrades a bit. A lot of the music choices were very bizarre, especially during the early fight scenes. When these songs play and don't fit the scene at all, it removes any tension the creators hoped to build.

My biggest complaint with Dead Zone lays with how underwhelming and somewhat boring the conflicts and fights are. Most fights are much too quick. Because of the nature of Dragon Ball Z, and knowing there are many many more episodes and movies after this one, you already know the outcome, but that doesn't take away from the fact that the antagonists of the film never feel like a real threat, only a minor nuisance. This may have been remedied if the fights had been longer and we had seen the characters struggle, but I suspect it isn't just that, but the entire way Garlic Jr. is built up as a character. It just did not work for me, and while Dead Zone wasn't terrible by itself, holding it up next to the series, even the few episodes I have seen; it just destroys itself in comparison.