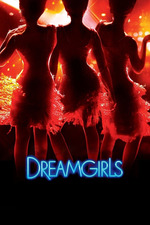 Dreamgirls is so much fun! Beautiful songs sung by incredible singers, I am just so glad I enjoyed this so much on revisiting. The best thing I can say about the film is that I love all of the tracks, and all of the Dreamettes/Dreams are glorious singers. Not only that but Eddie Murphy has a fabulous performance in the film as well.

It isn't perfect however. When not focusing on Jennifer Hudson or Beyonce, the film seems to forget there are two other women in the film that should be central to the plot. It isn't inexcusable, just pretty strange they didn't have more character arcs for themselves. I also don't think that Jamie Foxxs character had enough songs, which is a shame since he is also a great singer.

Either way, great ending, great beginning, and a ton of fun to be had in the middle. Some pretty standard shot composition takes up the majority of the film, but it is also executed well enough to still be pretty pleasing to the eye. Pretty much everything in the film is well executed, except perhaps the script forgetting about some of its characters. Great film.