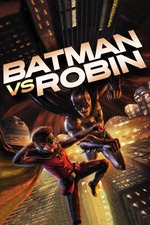 At the very least I can say Batman Vs. Robin is infinitely better than Son of Batman. Damian is still an annoying character, but is much much better in this. The villains are much more interesting than just Deathstroke, and there were some really cool scenes in this film.

I really liked that Nightwing was like an actual character in this film, instead of just someone for Robin to fight. The same goes for Alfred, who has some really great moments in this film, like the time he pulls out a shotgun on ninja zombies.

The problem is that the execution just doesn't quite make it on every aspect. Talon doesn't have enough character development, neither do any of the other parts of the Council of Owls. The biggest fault of the film is the same problem I always talk about. It is way too short. But, its predecessor has proven that you could watch a much worse Batman animated film.