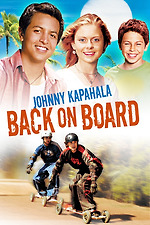 Johnny Kapahala - Back on Board

SOMEHOW, the sequel to Johnny Tsunami is even worse than the first. Somehow, making the film center in Hawaii made the film worse. It still features almost no Native actors, and again, a movie about a surfing enthusiast has almost zero surfing. The storytelling decisions in this film are absolutely mind boggling.

The film is also super rooted in talking about capitalism, white money in native islands, and centers once again around a group of white people. That dirt board. Suffice it to say, Johnny Kapahala is probably the worst Disney Channel original movie.

Let's make more movies in Hawaii. I don't even care if they want to make it centered around a white person. I think Beyond Paradise is an excellent film that perfectly encapsulates the culture shock related to moving to Hawaii. But just have Native voices at the very least. Have supporting characters that are Hawaiian. Have more crew members in it that are Polynesian. Make a fucking effort instead of putting together another shitty movie like this and putting a single token Hawaiian person in it.