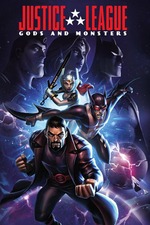 Some really interesting concepts in God's and Monsters. I like the alternate versions of Superman and Wonder Woman, but Batman felt a little too shallow of a character to be enjoyed fully. The rest of the characters were fine, besides Luthor who was really really dumb. His actions and his character design were just pretty poorly done.

While I enjoy a lot of the concepts, the main story is pretty lackluster and doesn't end up really saying anything about anything, instead going the same old route of supers vs. the government. On top of that I really wasnt a fan of the animation design in this film. Characters are much too angular and seemingly everyone looks like Jafar from Aladdin.

Even with the mismatching of quality in the film, I would like to see more things with this Superman in the future. That would be pretty neat.