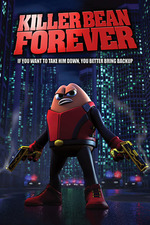 Absolutely dreadful. From the piss poor voice acting, to the terrible characterization, to the abysmal fight choreography, even as a meme movie, Killer Bean Forever fails miserably in all regards.

The action is really bad. Every bean dies in the same fashion, bullets are almost never visible, and Jeff Lew seems to think that having a Bean jump and spin in the air counts as choreography. That's all that happens. Sure it was kind of endearingly bad the first scene it showed up in, but condtant recycling of the same elements for an almost 90 minute movie just made me want Killer Bean to end my life.

I actually thought the music was going to redeem some of the film for me. Some of the opening tracks were catchy and pretty decent, but they ended up devolving into the same mess as the rest of the film. Generic, boring, and overused. Also completely tonally inconsistent. No matter the scene, action based or dialogue based, the same time is captured in the music, creating extremely mismatched scenes that added to the frustration of watching the film.

I do not like Killer Bean. It is very very bad. Don't watch it.