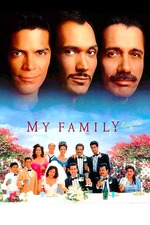 A little known film produced by Francis Ford Coppola, and with an incredibly stacked cast with Edward James Olmos, Jimmy Smits, Jennifer Lopez and more that seemingly perfectly captures the lives 1st, 2nd, and even 3rd generation immigrants to the United States, My Family is a truly remarkable film.

The film is able to capture so many emotions and tell so many stories, that all perfectly weave together and make a rock solid story. The character arcs of Jose, Chucho, Jimmy, and Maria were probably my favorites, but there was so much the film had to offer. That being said, I do think the film was a little on the shorter side on what they wanted to capture. I could easily see this film being 3 hours long and still being just as well paced but being able to expand on concepts and people just a little more.

Whenever a film is able to weave between comedic scenes and heart wrenchingly brutal ones, it has my full attention. My Family constantly does that, and certain characters just have an incredibly rough life. But there are moments of hope and love even for them, and it makes it all a little better.

Edward James Olmos' narration over the film was an excellent addition that I am really glad was there. I am not always a fan of a narrator in a film, but this was definitely improved by it, and it became one of my favorite parts. However, my favorite scene was when Jimmy and Isabel were just dancing outside. It captures all of the light the film has, with some great cinematography and true passion poured into it. My Family is a great film that I will remember for a long time to come.