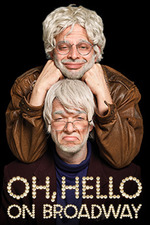 The bits with Steve Martin were top notch. I laughed quite a bit. But that was most of the laughs I had watch Oh, Hello. As a fan of John Mulaney and as a ocassional viewer of Nick Kroll, I was pretty disappointed in this. The performance centers a lot of its comedy around mispronouncing words, which was funny the first 5 times. Everything after that was just a bit boring.

It's not like nothing worked. The whole running joke with Ravi, their unpaid intern was pretty amusing and the gag with Matthew Broderick behind the door was great, but then there are long sections of the performance that just fall flat and aren't humorous in the slightest. Unfortunately, John Mulaney did not hit the nail on the head on this one.

The World of Kanako