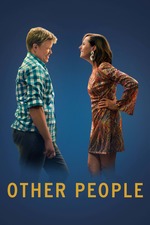 Other People tells the story of a woman dying of cancer through the eyes of her estranged gay son. The film tries to tackle a lot of issues of homophobia and forgiveness, but never fully ends up taking a standpoint, leaving the film in a kind of limbo between ideas.

The performances are all good, but the best example of a great performance from the film is Molly Shannon as the mother dying. The makeup is good at capturing the look of someone knocking of deaths door, but her mannerisms and dialogue delivery are what really seals the deal of the performance. Jesse Plemons also does a great job for the most part. And Bradley Whitford is really good at playing evil white people, so he nails the performance.

Besides the lack of depth into the themes of the film, I also think it was a little too short. Each segment of the film is seperated into a day or so of a month of the year they all live together. And each month feels like it could add a lot more if just a little more dialogue or heart to hearts or something similar was added. 10 or so minutes added to the film just to further explore the familys relationship with each other could have greatly improved the film.

I will say however I did enjoy the film, and the beginning and ending are both top notch and probably the highlights of the film.