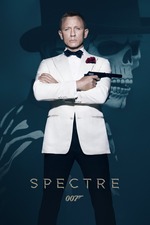 I suppose its only fitting that Spectre goes back to the roots of the series. And by that I mean its dreadful, with wooden acting, flat camerawork, and a terrible storyline. I knew the "twist" of the film going in, but it was still pretty bad regardless of my prior knowledge. It doesn't have any actual weight to anything, but the movie sure wants to convince you it does. It also completely destroys the timeline of Bond films, but that timeline was already pretty bad and didn't make any sense.

It feels like Craig is completely phoning it in. Most of the actors follow suit. Waltz, who is a tremendous actor usually, delivers one of the worst performances I have seen by him. Whishaw, Fiennes, and Harris do alright, but the script really does not give them a lot to work with. And as far as Andrew Scott is concerned, he is criminally underutilized and underdeveloped. From both an acting standpoint and a writing standpoint, Spectre is a complete failure.

It's a real shame that Sam Mendes returned to direct a sequel to Skyfall but brought none of his stylish directing talent with him. The whole movie feels artificially manufactured by an AI, with no driving force of artistry to help convey the deep emotions and ideas it so clearly wants to have. Thomas Newman returns to the composer's chair for the film, and while there are brief moments of majesty in the score, it completely pales in comparison to Skyfall's soundtrack. And MAN was I disappointed in Hoyte van Hoytema. After seeing Interstellar, Her, and Ad Astra, all movies he worked on as cinematographer, the one thing I assured myself was that this movie was going to look gorgeous. I suppose Spectre ended up looking fine, and it's obvious a professional is behind the camera, but it doesn't capture any of the essence that any of those previously mentioned films did. It's flat, dull, and reminiscent of a car commercial of all things.

Spectre may not be the worst Bond film, but it sure tries to be, and it is easily the worst of the Craig era films. Say what you will about Quantum of Solace; I thought it was a boring piece of garbage with one or two good scenes, but at the very least it was under two hours and Craigs performance is awesome. Spectre is 2 and a half hours and nothing of value.

And with that... I have finished the EON Bond films. I would like to say it was a pleasure, but it wasn't at all. But I did say I would watch all the Bond films, so eventually I will get around to watching Never Say Never Again, and the 1967 Casino Royale. But for now I am tired. I must carry on my journey and hopefully watch better movies.