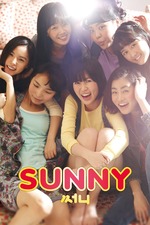 An incredible narrative and dialogue driven story of friendship, not only is Sunny a great film but it is also a film that makes me respect Kang Hyeong-cheol even more. His film Swing Kids from last year was an absolute blast for the majority with harrowing elements sprinkled through out. And that's about the same with Sunny. Dealing with bullying and terminal illnesses, but also with undying friendship and kindness.

The editing and transitions are beautiful and very smooth, as the film jumps from modern day to their school days. Each scene adds something new and interesting to the characters, and my one complaint is that I wish it had been a little longer to further expand on them. Terminal Illness fucking blows, but as this film beautifully illustrates, the victims are never weak. They are strong willed and a lot of the time strong bodied until their passing. The film does the great choice of not making the victims seem frail, but incredibly strong. Overall a great movie that I of course cried to.