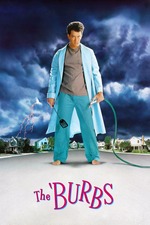 Joe Dante knew the true scariest thing on earth, The Suburbs. Tom Hanks stars as a paranoid man out to find out what exactly his new neighbors are up to. With heavy themes of xenophobia, The Burbs for the most part is right up my alley.

For much of the film our leads have no proof and all their accusations are baseless or with very little backing them up. While being creepy and funny, the film also deals with a lot of really intense themes, such as xenophobia but as well as classism, because the first interaction with someone from the house is obviously poor and undereducated, but they merely see him as creepy.

The Goldsmith soundtrack is legendary. Probably one of his best works, it was the standout of the film for me. As well as the supporting acting of Carrie Fisher, who was delightful in the film. Tom Hanks did a bang up job and I was really enjoying the film.

The ending kind of blows however. The mystery, the questions, all of it are thrown out for a rushed out ending that exonerates everyone. It just felt really cheap and against a lot of what the film had been building up before hand.