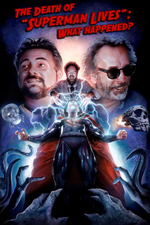 The Death of "Superman Lives": What Happened?

Journey To The Cage

The documentary sheds so much light on the production of "Superman Lives" and the interesting to terrible ideas that were there each step of the way. There are some really great questions posed to the interviewees and I learned quite a bit I had no idea of.

But the film is also extremely self gratifying. The vast majority of the film has you feeling a strong presence sitting on your shoulder whispering in your ear "look I'm a documentary maker, I'm really cool" and it just comes off as really bizarre and distasteful.

The worst parts of the film are as follows. 1. Nicolas Cage was not interviewed. What the heck? 2. When they don't have concept art instead of just staying on the interviewees face the film has their own artistic versions of these scenes that are being displayed, and they are played out either as a cartoon or a live action skit. The quality is extremely bad, making the live action segments look like they were literally out of a Nostalgia Critic video.

I still think the film is worth watching. The small moments of Nic Cage in his Superman outfit are breathtaking, and it is really informational. I just wish they weren't jerking themselves off so hard.