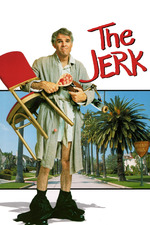 Not nearly as offensive or outdated as I thought it would be, The Jerk is a film with a ton of genuinely hilarious moments. A lot of them being in the first half. The opening scene of Steve Martin and his adopted black family singing and dancing and him trying very hard to snap or dance on rhythm but just completely failing was fantastic.

The whole bit with the cans and the gunman was probably my favorite part in the entire film. There are other fun parts as well, but I was laughing extremely hard over the cans bit. After about the halfway point of the film it does lose a bit of its charm, and in probably the worst scene in the film, relies on racial slurs for shock humor points.

Even with the not as good second half, I think The Jerk is really good and I think everyone should watch it. It's very very funny and Steve Martin is a great leading man.