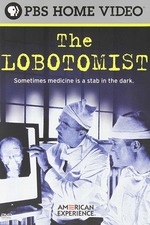 So, PBS is a great service to the public. There is some great informational things available through them, and they offer great kids programs also. As an adult I am captivated by a lot that is broadcast through them. However, when it comes to feature length documentaries, the budget constraints and push to hit certain times definitely starts to show.

With 2008's The Lobotomist, we are shown an awful human being deny that he was awful. We see witness accounts of these events and mostly see these things through the eyes of medical historians. This is all well and good, however the film would have been much more effective had they been able to contact more people personally affected by the situations at hand. Instead we get just a little too much of a history lesson, instead of a lesson combining history and empathy.

Don't get me wrong. I love learning about the past and learning about the history of lobotomy was as intriguing as it was revolting. It just didn't have enough to keep me properly engaged. However I would never say it was a bad film or I regret watching it, and some of the accounts, even if there are few, are extremely harrowing. I just wish the film had been a little more solid and had more framework done to it.