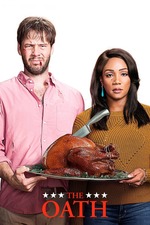 I really enjoy Ike Barinholtz. He is a pretty funny dude and with this film he proves he can direct a good film. The problem is that the good film is the first half, and then he also shows he is capable of directing a pretty bad film with the second half. However overall I still look fondly on The Oath.

The first half of the film has a lot to say about society, white privilege, police brutality, and being forced to spend time with bigots. It also executes these ideas with a great deal of comedy, and I legitimately loved the chemistry that Ike and Tiffany Haddish had. The film is worth it solely for the first half.

The second half is where things get messy. A lot of the analogies and truths that Barinholtz was trying to say get muddled and diluted, and the film starts to lose its focus. Instead making the film a somewhat bad and generic kidnapping thriller.

I do think the pros outweigh the cons. Even if they just barely do so. I still think the film is worth watching, I'm just disappointed on what could have been.