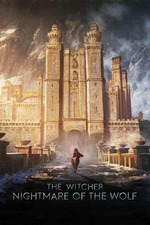 There is potential. I enjoy this world of magic and monsters. It has always had the making of something greater. Even though I have not loved the Netflix series; there was something promising with the commitment.

With the people involved and the plans on the table; there is something about all of this that says more than simply a company wanting to cash in on a popular franchise. That's likely but there is a passion behind this.

The passion might not have been clear until this. It was something to be cautiously optimistic about. Maybe this was the answer as to Netflix caring more about the money than the expansion on a great world.

Obviously there is a care for money; everyone has that. But this said so much in terms of how well it was handled. It is not only a great addition to this universe; but it's just an brutally incredible dark fantasy film.

If you are a fan of the series; this is a must watch. If you're not: It is still worth seeing. Because even though it is not the best of the best in animation. It has some stunning shots that you could hang up on a wall.

From the entertaining and savage action sequences to the exploration of Vesemir with solid voice work from the likes of Theo James; supported well by other impressive names such as Lara Pulver, Graham McTavish.

This is not one of the best films, nor animated films. But it is very good and worth seeing. Even if you have not really enjoyed the Netflix series. This felt like something completely fresh and different.

It only gets me excited again for this franchise's future.