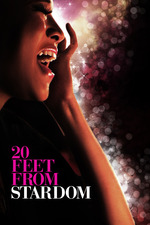 20 Feet from Stardom is an affectionate and uplifting crowd-pleaser from documentarian, Morgan Neville. When it pipped The Act of Killing to the best documentary Oscar more than a few eyebrows were raised but it is easy to see why this appealed to Academy voters as it is not only touching and soulful but also a film that offers a potted history of America through the lens of contemporary music.

It is a documentary that is a tribute to the unsung stars of popular music. Morgan Neville shines the spotlight on the backing singers that brought some of the biggest tracks in music history to life. Working with megastars and groups like The Rolling Stones and David Bowie they are an integral part in creating hit records yet remain nameless and faceless to many.

The film features interviews from both the backing singers and the stars who benefit from their considerable talents. As interesting as it is to hear the stars pay their respects to their unappreciated colleagues the documentary comes to life when hearing directly from the backing singers themselves and the difficulties and joys of their craft. Naturally the film focuses on some of the biggest names in the field such as Darlene Love and the incredible Merry Clayton who both tried to emerge as solo artists.

Perhaps the most interesting aspect of the documentary is why such great vocalists were unable to make it as stars in their own rights. Clayton released several amazing solo records but never achieved the success she deserved. From corporate politics to sheer bad luck it seems each singer has their own tale of woe and misfortune as they fail to emerge from the shadows and receive the dues they are truly owed.

Unsurprisingly, the film is full of music including archival footage and new recordings. The music is rousing, soulful and toe-tapping and even though Neville’s approach is disappointingly conventional there is no doubt that this is a joyous and inspiring documentary with a wide appeal.

20 Feet from Stardom might not be an earth shattering documentary but it sure is an entertaining one. With charismatic and candid contributors and a fantastic soundtrack it isn’t too hard to see why this became one of the most popular documentaries of 2013.