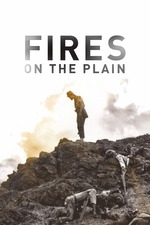 Fires on the Plain

Kon Ichikawa’s Fires on the Plain is a searing portrait of the debasement and horrors of war. Many filmmakers have documented the hell and futility of conflict but few films have so successfully and shockingly chronicled the sheer dehumanising impact of war. It is a brutal indictment of humanity as the scattered remnants of the imperial army attempt to survive in a foreign land, no matter the cost.

As World War II draws to a bloody close, the malnourished and exhausted remains of the Japanese army march across the Philippines retreating from American forces. The film chronicles Private Tamura’s nightmarish journey as he finds himself abandoned and consumed by tuberculosis and driven to unspeakable atrocities in order to survive great psychical and psychological turmoil.

Gaunt and ravaged by starvation and exhaustion, the few remaining survivors are dead men walking. Director, Ichikawa, even went as far as starving his cast and forbidding typical hygiene routines in order to capture the degradation of the troops. Its shocking authenticity adds immeasurably to the film’s unbearable hopelessness as the cast and characters are put through their own private hell.

The film is littered with haunting imagery of humanity’s depravity in the face of certain oblivion. From violent acts of barbarism to mountains of corpses, the film is unrelenting in its desperation and cruelty. Fittingly beginning with a slap in the face as Tamura is ordered by his commander to seek medical help or commit suicide, it continues to pummel both protagonist and audience alike.

Eiji Funakoshi as the skeletal and fevered Tamura is a revelation. His portrayal goes beyond mere performance as he gradually succumbs to the horror and madness that surrounds him. His sunken skin and dead eyes are as haunting as the film’s most graphic sequences, captured in all their harrowing beauty by striking black and white cinematography. It’s only a shame the melodramatic music seems so inappropriate for such a stark picture.

Most films are little more than simple disposable entertainment, Fires on the Plain is not. This is an essential work of uncompromising, unrelenting and unshakeable darkness.