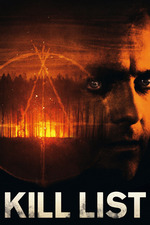 Kill List shares a lot of similarities with the director's previous film, Down Terrace: both subvert typically American genres with a very British kitchen sink sensibility and both ultimately descend into farce. Kill List's descent is certainly the more interesting and entertaining of the two but it is not without its problems. The film builds an effective mood helped both by an excellent score and the gradual teasing of what is to come. Whilst it undoubtedly needs to lead somewhere I'm unconvinced the ending is quite deserved. Yes, it is surprising (even with the little hints dotted throughout) but it slips into being comical rather than unsettling. Perhaps this is deliberate, the film has a strong streak of black humour, but you never quite follow the character's descent into madness which strips the film of its potency.

That said the final twenty minutes are brilliantly shot and edited and the central characters are well realised. The violence is swift and hard hitting and it was a novel look into a world that is often portrayed very differently on screen. Ultimately though it felt like a movie full of memorable moments but one that was not quite the sum of its parts.

I think what might be most infuriating for some is that the film builds in such a way that you are conditioned to expect answers yet that is far from what you get. It also doesn't help that any interpretations don't seem to stand up to close scrutiny:

Could the cult be seen as a New World Order, symbolically killing religion (the priest), government (the MP) and even perhaps history (the librarian - the guardian of all knowledge) to start afresh? The constant symbolism of rabbits would perhaps support such a theory as they can represent rebirth. Is it a twisted take on Alice in Wonderland with the hitmen actually killing their guide (the march hare) after falling through the rabbit hole (the labyrinthine tunnel) therefore being utterly lost in this strange new world?

The likelihood is that it is none of those because there is no great meaning to it at all. It is just an attention grabbing end that has no greater significance than confusing/delighting/pissing off those that watch it.