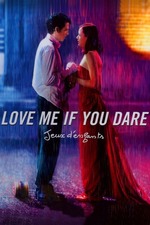 Love Me If You Dare

Love Me If You Dare is a French romantic-comedy deeply indebted to Jean-Pierre Jeunet’s Amelie. It shares the same whimsy, nostalgia-fuelled visual flourishes and quirky Gallic sensibility. Unfortunately it is largely devoid of the charm or endearing characters that made Amelie such a hit around the world.

The film follows best friends, Julien and Sophie, from childhood through to their adult life as they continue to play a series of elaborate and often mean spirited games of dare at the total expense of the world around them. Although what starts out as a form of escapism for the two children, one suffering from racist bullying the other fearing for the health of his terminally ill mother, soon morphs into an entire way of life as the dares dramatically escalate.

The problem is, beyond some of the early innocent games, these dares seem unnecessarily nasty. Rather than being charmingly idiosyncratic these characters just seem horrible human specimens that enjoy inflicting misery on each other and those around them. Whilst their malevolence stops the film from being sickeningly sentimental it also makes it practically impossible to warm to the two characters. It doesn’t help that their wicked games define their whole characters - beyond their unhealthy connection you never really get a sense of these people nor what drives them (even their childhood traumas are superficially explored).

The film is briskly paced with director, Yann Samuell, throwing every visual trick at the screen yet it all seems horribly contrived. The sensation of contrivance extends to a script that rings hollow at every turn. Whether it is the wholly unnatural exchanges between Julien and Sophie as children or the irksome on-off relationship during their adult lives, the whole thing is forced. Even the normally lovely Marion Cotillard in a lead role couldn’t save it for me.

Love Me If You Dare is a calculated and deeply superficial romantic-comedy with a mean streak that completely removes any sympathy for the obnoxious characters.