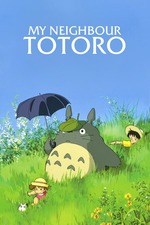 It is with good reason that Hayao Miyazaki is considered one of the greatest ever animation directors. His body of work is unrivaled and has enchanted audiences, young and old, for four decades. My Neighbour Totoro is not only his most famous film but also his most personal and greatest achievement as a director.

The film doesn’t feature a grand sweeping story or a plot with great peril, instead the movie is more a reflection of tiny events that envelop the audience in the wonderful world of a child's imagination and the world of the Totoro. If you were to break the film down into each of its major moments the movie would appear to be very shallow and dare I say dull. However, like so many of Studio Ghibli's output, the real enjoyment from the film derives from the tiny and seemingly inconsequential events that regularly punctuate the key events in the film. Many of these smaller moments feature Mei, the younger sister, as she plays by herself in the countryside by her house. She may try and catch tadpoles in a stream or watch a toad slowly walk across a road. Neither of these scenes are integral to the telling of the story, but the audience becomes more immersed in the world on screen, and begin to view the world as a child, just as Mei, and to a lesser degree her sister, Satsuki, see it.

Satsuki and Mei's mother is hospitalised throughout the duration of the movie, yet the audience is never aware of her illness. In Tsuguko Kubo's novelisation of the film her illness is revealed to be tuberculosis. As mentioned earlier, My Neighbour Totoro has many personal and autobiographical elements, and the hospitalisation and illness of the children's mother is the most prominent. When Miyazaki was a child his mother also suffered from TB, and the children’s uncertainty and lack of awareness to the severity of the illness are direct parallels to Miyazaki's own childhood. My Neighbour Totoro can be quite a different viewing experience when you watch the film as autobiographical therapy with the story acting more as an expression of the director's childhood, and the Totoro's as a way of escaping his reality, than it being a great epic fantasy adventure. This is my own interpretation of the movie, and many may read entirely different connotations into the actions on screen. This is where one of the great strengths of the film lies. No message is force fed to the audience, and no overarching narrative is explored. Familiar Miyazaki themes are of course explored - nature, magic in the everyday, inter-generational relationships etc. - but they are always background details. The audience is able to interpret what they see on the screen without being led by the hand by the director. Older viewers can be transported back to simpler times when the summers were endless and your imagination could keep you entertained all day long, whilst younger viewers get whisked away into a magical world just out of reach.

With the mother hospitalised, Satsuki, takes over her role in the household. She cooks food for the family, and acts as guardian to her sister. Her character can be seen to be growing up throughout the film, but every now and again she slips back into her carefree childhood. This careless abandon is often brought about by the introduction of the Totoro's. Whilst Mei is arguably the protagonist of the story for younger viewers Satsuki represents the way in for an older audience. There is a hesitancy to her actions, she exists both in the reckless child world as well as attempting to be a responsible adult. It is in this shifting perspective that Miyazaki has crafted a truly universal film that appeals to all ages.

The Totoro's are utterly charming, managing to be an amalgamation of familiar animals yet never derivative, just like something that would appear from a child's own drawings. The beautiful animation make these forest spirits come alive. The way they breathe, the texture of their fur and the subtle facial expressions help to create a fantastical yet entirely believable creature that any age will be able to relate to. There is a great innocence to them, and the fact that only children can see them and communicate with them further emphasises that you as the audience are viewing this secret world through the eyes of a child and their imagination.

My Neighbour Totoro is a magical, personal and unforgettable experience, and for me, the greatest animated film of all time.