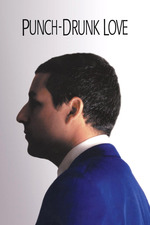 I always get strange looks when I tell people this is my favourite Paul Thomas Anderson film.

“But what about There Will Be Blood?”
“Have you not seen Boogie Nights?”

These are both sensible questions and brilliant films but it doesn’t change the fact Punch-Drunk Love is still his true masterpiece. It is his best film for numerous reasons - it is his best because it has a creative freedom rarely seen in his work, before or since. Anderson has become famous for making epic movies be they convoluted and complex ensemble dramas or films on a vast canvas. Punch-Drunk Love, on the other hand, is a small movie in every conceivable way be it cast size, narrative complexity and budget. Yet there is an attractive spontaneity here that is largely absent elsewhere. More importantly it is the first, and perhaps only, Anderson film that feels wholly his. It is much harder to pick out the filmic references this time around. No doubt both Boogie Nights and Magnolia were intense labours of love but this film shows Anderson free from the shackles of Scorsese, Altman and his other inspirations and free from audience and critical expectation. I can’t say whether Punch-Drunk Love is the director’s most personal film but it certainly feels like it.

Adam Sandler, one of the worst people ever to grace the silver screen, is nothing short of a revelation here. Anderson has always demonstrated a skill for directing actors but nobody expected him to get a performance of this magnitude out of Sandler. It helps that Barry is a distorted version of the comedy characters he has become famous for. There is an anger to nearly all his characters but here, rather than played purely for laugh,s there is also a crippling sadness to his frustrations as he struggles to understand the people around him:

Yet he is able to find a strained connection and to slowly understand a person via his relationship with Lena, played by Emily Watson. Her character is warm, understanding and, in her own way, as flawed as Barry. It is easy to see why Jean-Pierre Jeunet wrote the role of Amelie for Watson. She isn’t as outwardly kooky as the Parisian matchmaker but there is a similar radiance and magnetism to her performance here. Whilst the film undoubtedly belongs to Sandler and Watson (as should any movie centred on a romance) it still contains a wonderful cameo from regular collaborator, Philip Seymour Hoffman, as a man trying to extort money from the naive Barry.

To Anderson’s credit the film never feels as quirky as the plot elements would suggest. There are unexplained events (car crash, a harmonium without an owner), an odd subplot involving pudding and air miles and a menagerie of not-right characters. Yet rather than being suffocated by pretentious kookiness the film has a disarming off-kilter tone that never feels cloying or manipulative. Given the exaggerated qualities of the characters the film is also refreshingly honest and profound. It captures the power of love in all its damaged and complicated glory and above all you feel a deep connection to both Barry and Lena which, in today’s world of bland and vomit inducing rom-coms, is a rare gift.

Not since Eraserhead has the cinematography and soundscape of a film so perfectly embodied the mental state of the protagonist. The film stock used gives a greater depth to the shadows whilst also providing colours with an intensity and ‘bloom’. Anderson and cinematographer, Robert Elswit, use this heightened colour (particular blues and reds) to signify the mental state of Sandler’s character - his frustration, intensity and uncontrolled passion. Jon Brion’s score, which was actually played on set during filming, is equally intense, discordant and all pervasive. Over the years I have read many complaints about the film’s ‘unwatchable’ artistic direction but the exaggerated audiovisuals put you directly in the shoes of Barry’s confused and consuming mental state and is a crucial element to the story.

Above all any film that can make the following line seem hopelessly romantic must be doing something very right:

”I'm lookin' at your face and I just wanna smash it. I just wanna fuckin' smash it with a sledgehammer and squeeze it. You're so pretty.”